Arriving to the Parks and What to Expect Since Re-Opening 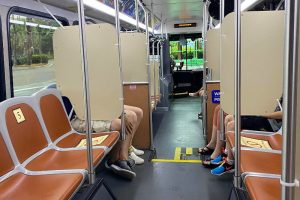 Getting there via Disney transportation or Driving into the Parks –so many changes that affect almost every aspect of Disney. Let me say at the beginning—things are changing constantly—so ALWAYS double check… also …sometimes the cast members can’t even keep up with the changes. Don’t get too frustrated at them since I am sure they get just as frustrated. What I did: checked surrounding signage and asked multiple people for a good understanding on what to expect.

I have noticed the hours to each park are staggered 1 hour off from opening to closing times. Each park is opened for 10 hours.

I believe the EPCOT hours being the latest are based on a general older crowd, International Food and Wine Festival can be enjoyed more as well for dinner options.

This is allowing a tighter control; better budgeted transportation costs and flow. It is distributing the arrival/return crowd rushes for parks.

Buses start running 30 min prior to posted park times. It had been an hour prior when they first re-opened. I asked a cast-member to verify but he was not sure. I then saw a digital bus sign at the Disney bus stop that stated the starting transportation times—confirming the 30 minutes prior to opening. (I expect this to change as crowds grow) I also would still arrive early to the bus station in order to get a head start on the morning crowds. With the limited guests per bus/seating ratio—it could still take the same time as a typical morning rush crowd before this mess started.

The Skyliner was operating an hour prior to park times. By the time I arrived at the Skyliner station from my resort, the line was already pretty extended. The lines can really fool you. Keep this in mind with any line you observe. The spacing of 6’ per party can make a crowd of 20 look like a crowd of 60. The queue can move so ‘fast’ at times one basically just does a very slow walk or an occasional hold at a marker to get to the final point. Easy peasy. It seemed most people follow the rules pretty well. If there are no ground markers, people tended to do what they have always done before which proves most people are good with just being themselves. Lol For those that want the space, they tended to put themselves at a distance. It all seemed to work out fine. I did not encounter any quarreling between guests.

Parking: This is the trickiest part and I would say… most annoying because, each park is different.

Magic Kingdom experience: they will hold cars at the parking lot toll entrance 1 hour prior to park time. If you arrive prior, they will have you turn around. This also goes for drop offs either by personal car, taxi or Uber. In saying this, make sure you time your arrival appropriately. Once they have you stopped and held at the parking toll entrance, they place a traffic cone in front of your car. They will not allow entrance until their system opens. This magical unknown time can be anywhere from 30-45 min prior to park opening. Example: we arrived at 8am to Magic Kingdom parking toll entrance. The park opened at 9am. We were held at the toll entrance. The cast member told us they didn’t know the exact time their computers release for parking access. At Magic Kingdom parking toll, the time opened at 8:15. For our EPCOT toll entrance experience, the time opened at the half hour mark (10:30am) and the park opened at 11am. EPCOT would not allow cars to hold at the parking toll entrance until 10:20am. They had cars turn around if arrived before that. When we arrived the first time, they told us to come back at 10:15. The second loop a different cast member told us 10:30. I asked why the different time. I was told to just come back at the first time. The cars will back up quite a bit from this holding pattern at the beginning, but the cast member told us the crowd only lasts about 30 minutes and after that the cars only trickle in post morning rush.

If parking, the park trams are not running so you will walk from your parking spot to the front entrance. The parking is pretty close-not a hard walk. Cars are parked every other spot front to back. This is actually FABULOUS!!! No tight squeezes getting out of your car!!! HOWEVER—once the morning rush is over, cars that enter later are allowed to park directly next to your vehicle. The first guests have already entered the park by this point. This works well since it is still giving social space for first wave of guests parking.

If arriving by other means, the same holds true. When arriving by Skyliner, we were able to enter the parks 20 min prior to posted hours. Temp checks. Here they take your temp via a thermometer that reads off the forehead. No actual physical contact is made. White tents are set up for this. Contracted company with contracted employees are performing the temp checks. Fans are around to help reduce the heat in immediate surroundings.

Once you make it past the Temp stations, you will head to baggage check. It is handled totally different. You basically hold all belongings close to you or in front of you as you walk through the detectors. If something buzzes, then you will be directed for further inspection. I did not see a single person get stopped for this. I guess that is a good thing, but it makes me wonder if it was really ever needed to begin with?? Funny how priorities can change so quickly and vastly. 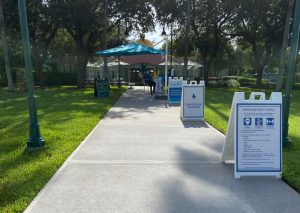 NOW That you have made it past these processes you are able to scan your band and enter the parks! Woohoo!!! No fingerprint verification is done any longer which makes the process a BREEZE! Amazing how quick the process is in when removing that little step!!! Again, one of those things that makes you wonder if it was ever needed. I understand the reason they had it but also—-did it really help their business that much? OK, I don’t want to go off on too many tangents, it is SOOOO easy to do! 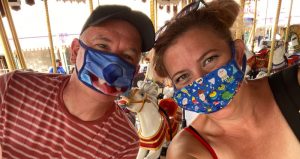 Masks: this keeps getting changed—always double check. no masks allowed that have valves or holes. No gaiters. Masks must have two layers of fabric. (gaiters only have 1). Disney masks that are sold—contain 3 layers. Feel free to cut one layer out. I did and it made a HUGE difference. They now must cover the nose AND the chin. The chin part is new rule and was implemented in the middle of our stay there. I felt this was ridiculous. It made a difference temp wise (maybe just mental?) having it between lower lip and chin, felt some air right there made a difference to me. Must be stationary to drink/eat without your mask. You can be just about anywhere to do this. You do NOT have to be in a restaurant or relaxation station to do remove mask for a drink or bite-just be stationary. YES, the cast-members will LET you know if they are not satisfied with your behavior. You will not be allowed any photopass picture if your mask is not being worn.

Queues for attractions: There will be social distance taped markers within all queues. Be mindful. Majority of guests were—again, no issues with this. Queues can look very deceiving with these guests in queue all spaced out. 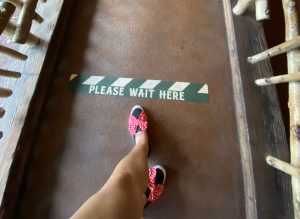 Green Circles: these are just what they sound like. They are markers to direct party groups too while waiting for a service- quick service pick up or an attraction. Party groups are asked to stay in the marked circle proximity to help space out within the sectioned area. Pictures for reference.

Keep in mind with the operation restrictions, even though the crowd capacity is limited, so are the attraction guest loads. Example: Tower of terror could hold 22 guests per attraction car but to keep with recommended guidelines, they may only load 8-10 guests. This scenario basically applies to all attractions. Yes, the waits have been significantly less for majority of attractions, but guests can still end up waiting 45-60 minutes for popular attractions. Under normal circumstances, the waits could be 120-300 minutes for the same attraction. This is better for park touring but correct expectation still needs to be held.

Also, with operation restrictions: some of the darker rides have experience changes. If pre-shows are limited or altered – it can affect the full attraction experience. A perfect example of this is the Haunted Mansion. Disney is very smart and thinks of everything. Operations are done so well, things run so seamless we never realize the importance of certain parts of an attraction. The stretching room holds two purposes. It adds a story setup for the attraction. Any Disney buff will tell you; the attractions ALL have stories to them. The second purpose for the stretching room is it allow your eyes to properly adjust to the darkness of the attraction. Without this step-the ride looks so much darker and many subtle details can be missed.

Other attractions are missing some sound effects. Not a huge deal but noticeable.